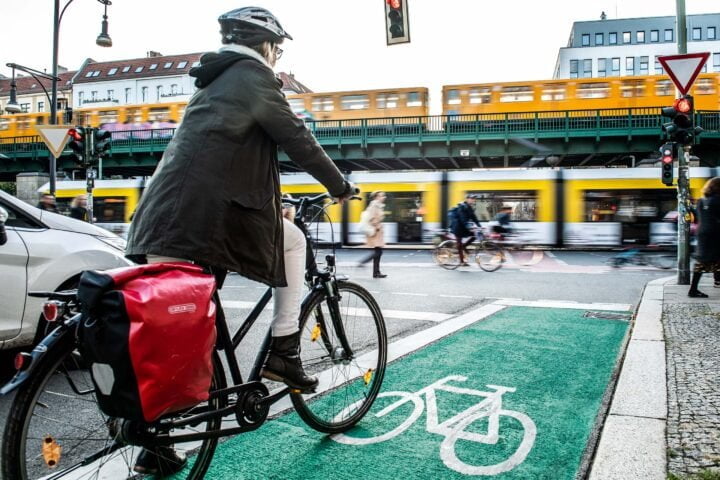 December 2021 – December 2022
In this sub-project, the causes of traffic disruptions such as congestion situations are to be differentiated according to the possible influences. What causes the congestion of road sections at peak times? Are traffic flow disruptions caused by commuter or delivery traffic, road works, parking and others? For these questions analyses of temporally and spatially high-resolution floating car data (FCD), data from stationary traffic counting devices and other data sources will be evaluated.

In order to develop targeted measures for environmentally sensitive traffic management, the causes of increased traffic-related air pollution must be investigated in the first place. In this context the focus is on nitrogen dioxide pollution, as the target values proposed by the World Health Organisation (WHO) are exceeded at all main roads in Berlin. In some cases by a large margin.

It is well known that the main cause of nitrogen dioxide pollution in narrow street canyons is local motor vehicle traffic, especially diesel engines. The nitrogen monoxide (NO) emitted by motor vehicles oxidises in the air to nitrogen dioxide (NO2). In addition, diesel vehicles in particular emit considerable amounts of NO2 directly. Other sources such as industry, power plants and domestic heating, as well as pollutants carried by the wind from the countryside into the city, contribute to nitrogen dioxide levels to a much lesser extent. Therefore, in this sub-project, traffic-related emissions are collected and traffic patterns are further researched. An in-depth causal analysis of air pollutants is not part of this sub-project, but has already been carried out as part of the second update of the Berlin Clean Air Plan.

In addition to the identification of road sections with capacity problems, the patterns of these problems (seasonality, times of day, etc.) will be identified. Furthermore, a more detailed description of mobility behaviours in Berlin and in sub-areas of Berlin is to be achieved, resulting from the evaluation of movement data.

Ultimately, measures are to be proposed that are suitable for reducing traffic-related air pollution. In addition to measures to avoid congestion, alternative routes or acceleration measures by controlling the traffic flow, interventionist measures (e.g. preference for environmental transport) should also be explicitly propose.These policies should contribute to a sustainable a reduction in the volume of motor vehicle traffic and to influencing mobility behavior. The focus should not be on infrastructural measures, but rather on effective and innovative medium-term measures. The overarching goal is to further advance the mobility transition.